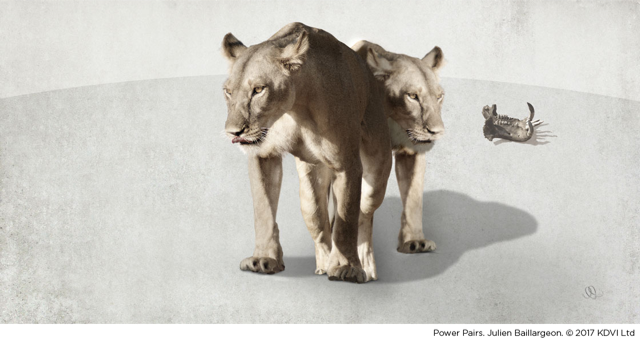 Emmanuel Macron, the newly elected President of France, was boosted onto the global scene from relative obscurity last year when the world media discovered his wife. “When I—no, when we—are elected,” Macron had promised during his campaign, “she will have a role and a position.” Brigitte Trogneux—Madame Macron—is 25 years older than her husband, and the couple first met when Emmanuel Macron was a student in a school where his future wife was a teacher.

Leaving the gossip and comparisons to Donald and Melania Trump aside, we are fascinated by this highly visible example of what we call professional “power pairs.” Emmanuel Macron has publically thanked his wife, saying, “She is always present. Without her, I wouldn’t be myself.” In other interviews, he has said: “She shares my life from morning to night.” “She always accompanies me, because this is my equilibre de vie (life balance).” Emmanuel Macron was the Finance minister of France under former President Hollande, but was still considered an outsider not only because of his lack of connection to any political party but also due to his young age (39). But he seems to have found an intellectual equal and a real power partner in his wife.

How are professional power pairs different from other partnerships, such as top leadership pairs, mentoring relationships, or small teams?

In our definition, we draw on the concepts of social pairing and power-in-context. Social pairs are dyads composed of two people who may become so closely fused that they lose some of their individuality in the eyes of others, but in exchange, they gain presence and influence. The two people are drawn together initially because they share some common traits, such as a similar age or physical characteristics. Over time—the longer they remain together—the complementary of their often radically different strengths increasingly becomes an advantage.

Research shows that the type of pairs formed in a specific social environment is related to what is seen as important or desirable in this context (for example, specific attitudes, concerns or skills). The opposite is true as well: people often sort themselves into pairs according to dimensions of a social group or environment that is important to them. Either way, individuals who feel “less desirable” in a specific environment may unconsciously join forces in pairs, in order to gain a degree of power that they might not otherwise attain.

Professional power pairs may seem greater—in terms of influence in their organization—than the sum of their parts. Why?

When two people form a power pair, others around them, at an unconscious level, begin to treat them almost as if they were one person. More than best friends or strategic partnerships, in power pairs we see two people who have become nearly indistinguishable within their environment. For example, their colleagues and others in their professional sphere begin to accept that both of the people in this dyad will always come to meetings together, and will not make decisions without consulting the other. These two people are so firmly aligned that it is very difficult to split their opinion. In addition, they work through any conflict between the two of them in a way that strengthens their pair relationship. The length of this relationship seems to be a factor in its success. As the pair grows closer, they develop a working alliance; they arrive at shared goals and opinions; and they exploit the complementarity of their differences.

Slowly but surely, this creates a sort of “superhuman-in-context” who is more powerful than most other individuals. This kind of pairing may occur at any level of an organization. There are power pairs with little scope for action within their official role, but with a high level of influence in the organization. This phenomenon is not as odd as it may seem—a well-functioning parenting team will be experienced as fused by their children, and indeed, this omnipotent parental stability is an important source of security in childhood. This element of transference helps to explain why groups will often accept a power pair without much resistance.

To sum up, if two individuals form a power pair in which desirable attitudes, characteristics, or behaviors of a particular social group are clearly recognizable, then the pairs’ fusional association will bring them greater power in that context. However, there are dangers. The power pair may lose touch with the realities of their environment if they neglect interactions with others. They might eventually isolate themselves as the pair may incite envy that leads others to break them up or reject both of them. If the power balance within the pair shifts, then the relationship may start to resemble involuntary servitude for one of the pair, creating unhealthy dependency on the other. If a power pair relationship is ruptured, the consequences can be traumatic for the pair and their environment.

Within their professional context, the visibility and influence of the power pair may eventually increase to a far greater degree than either individual would have been able to claim alone.

Silicon Valley has been slammed lately for being a very tough environment for women. A pair worth noting in this context is Safra Catz and Mark Hurd, both CEOs of Oracle since late 2014, when founder and chairman Larry Ellison stepped down to the position of chief technology officer. At that time, Hurd, former CEO of Hewlett-Packard, had just fended off accusations of sexual harassment while at HP. Catz, who has been with Ellison at Oracle since 1999, worked hard to crack the boy’s club environment of Silicon Valley. Catz and Hurd have enough similarities as well as radical differences as individuals to make them a classic power pair. But to make matters even more intriguing, some observers now say that the real power pair at Oracle is Safra Catz and Larry Ellison himself, with Hurd playing the role of front man and elephant (big client) bagger.

It sometimes makes sense to consciously seek out, create and nurture a power pair relationship in specific contexts. There are important ways in which you can learn or benefit from power pairs:

First of all, studying power pairs will provide clues about what characteristics or behaviors are valued in a specific environment.

Look for long-term power pairs in your professional environment: pairs with power-in-context. Identify the dimensions or characteristics that they are known for being good at. This gives an indication of what characteristics or dimensions the environment favors. For example, we often see academic articles or books written by a pair of professors who research and co-author together exclusively throughout their career. Power-pairing in this way strengthens visibility and impact in a dimension that is critical for survival in academia—“publish or perish” is no joke in this environment. Other organizations might be driven more by KPIs or other quantitative measures; and some organizations put a high priority on innovative thinking.

Next, if you feel less-than-expert in a key dimension in your organisation, proactively find someone to team up with, and nurture that relationship.

An invincible power pair will have not only a strong technical prowess or broad market experience, but also complementary people skills—if one person in the power pair is an extrovert and the other more of an introvert, then the pair can cover the spectrum from listening deeply to individuals, to energizing large groups. One might be a quick, action-oriented first mover, whereas the other is a more reflective, big picture thinker. Whatever works! The key is to always present a united front to the world.

Harness the invincibility of power pairs in contexts where your organization lacks experience, top credentials, or whatever the “right stuff” might be in your environment.

Debate teams often organize competitions on the principle of “power pairs,” which in that context refers to a process of matching teams of similar strengths as the competition unfolds. As a senior executive, you might foster power-pairs among your employees in areas where organizational performance could be improved—in sales and negotiations teams; service partnerships; and client relations, for example. The objective is to support power pairs that boost desirable characteristics—sharp sales skills, or creative thinking, or financial acumen—of the people on your team to a level equal to, or above, what your competitors can muster. This can be particularly effective in areas where your organization is growing or changing. We know of one senior sales and marketing executive in the aeronautical industry with a sharp instinct for people and a thirst for deal-making. He knew that he could move quickly to close deals in his global region—all of Asia—because he could rely on a power pair of engineers who always worked together, and were recognized as being the best in the world in their field.

Do you know of any power pair in your organization?

Have you ever been in a power pair?

Have you ever managed a power pair?